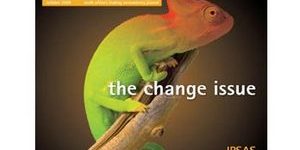 A few weeks ago I attended a presentation by JP Landman, a self-employed political and trend analyst, Harvard graduate, and author of the article “Is the bad mood justified?”.

Landman introduced his presentation with a story about a South African hedge fund manager he knew, who had taken a four-month diving vacation in January this year, and by the time she returned in April, the mood in the country had changed completely.

He went on to say that the Eskom crisis, the Zimbabwe elections and the conflict there, coupled with the global turbulence around the three Big Fs – Finance, Food and Fuel – had hit many South African’s in the gut.

So what Landman decided to do through his article, mentioned earlier, and together with the presentation, was to deliver the good news – with a careful analysis of trends.

What his research boiled down to was that there are four tipping points that create a successful nation with economic growth. Obviously, a nation must keep getting richer, and it has to develop strong social capital, which is the cohesion of a nation where all are  working towards a common goal.

•  enforcing rules and norms of behaviour.

He pointed out that the South African economy is growing, despite what doomsayers predict. Economists are now agreeing that growth will be between 3% and 4% (albeit 5% in previous years). He also showed that in the 14 years since democracy, per capita incomes have increased by 26%. With the growth rate at 4% in the next seven years, he added that per capita incomes can again increase by 26%.

Now while Landman’s research definitely spiked huge interest and optimism amongst those at the presentation, my concern, and I guess, our collective challenge is definitely guided by the 2nd, 3rd and 4th tipping points earlier identified by Landman.

‘Social capital’, which talks directly to a communal sense of value (which means a drastic reduction in crime statistics and has a causal link to poverty, which is a key area of challenge that we have yet to tackle with complete force or even cohesion within economic or political terms), ‘stronger institutions’, which is directly linked to accountable and transparent processes (which talks to corruption and fraud within state departments), and ‘enforcing rules and norms of behaviour’, which talks directly to justice and equality under the law and the constitution.

How do we quantify real change within these tipping points? And how do we ensure that they have a positive impact on economic growth and sustainability?

Do we look at policy change, moral regeneration projects such as the Heartlines campaign? Do we consider the transformation imperatives adopted by professional bodies? Do we quantify real change in terms of the growth of B-bBEE deals?

Just how do we quantify real change within these areas so that we are ensured of building a successful nation for all sectors of our society?

I’m not sure of the definitive answer to this. But what I do know is that, when a chameleon, for instance, changes its colour (for whatever reason), the science experts agree that the quantifiable measure of its success lies in its survival.