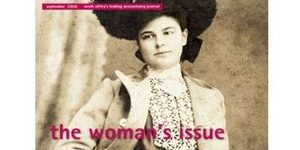 Believe it or not, the image on our cover this month has caused some consternation in our office. I’ve had to endure a barrage of opinions raging from the lucidly candid: “Are you mad?”, to the: “How can you portray such an old image of women?”; “Surely you don’t want our members to think that we believe women are still oppressed?”; and “Why not showcase a woman that’s suited, wielding a briefcase or lap top, ascending stairs to the top. Surely that’s far more representative of where women in this profession are today?”

Now, if you will, the image in question is typically Victorian-age, and so naturally you would be inclined to conjure up an image of women enslaved in the home, bearing large families, baking cakes and drinking tea.

Well, I’m also familiar with a very progressive Victorian-age. An era that saw women campaign and fight for social, political and economic reform.

While the Victorian era didn’t see women get the vote, it is well documented that this era saw women fight for and get better employment, which led to more independence. Many women (widowed and spinsters) became prominent in property ownership, financing businesses as sleeping partners, they were also involved in small family partnership firms as bookkeepers, handling correspondence, dealing with clients, and arranging deals. (www.bbc.co.uk/history/british/victorians/ -)

So the Victorian era wasn’t all about baking cake and drinking tea, much the same as modern day South Africa isn’t all about equality and no glass ceilings for women.

We’re celebrating women our profession this month in our Special Report on page 43, and while women are making significant inroads to many sectors, including the accounting profession, there is still a long road to travel.

We still collectively need to campaign for equal remuneration, increased numbers of women at senior management level (not just at board level), and we need to ensure that the pipeline throughput for entry to the profession, for women, remains at a steady growth rate.