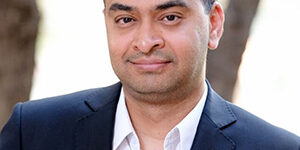 The Future Fit award recognises the courageous, unconventional SAICA member who doesn’t believe in limits and who sees every day as an opportunity to be different. This person is digitally savvy, approaches things differently, has the skills and expertise to remain relevant in business in the future and creates the change and opportunity they want to see in the world.

A seasoned public servant with more than 17 years in the public sector,

Shabeer Khan CA(SA) has been chief financial officer of the Department of Trade, Industry and Competition since 2013. He heads up the financial management services team – a strategic branch of the business responsible for driving the strategic objectives of the department. Under Shabeer’s lead, the department achieved its first-ever and subsequent clean audits.

Shabeer is motivated by the ability to serve and to continuously make a difference. “I believe that success is about making a difference in whatever you do. Eventually, all the small differences add up and become one huge success!”

Shabeer saw this as the ideal platform for an ethical, resilient and capable department to continuously drive change and improvements and laid the foundation for several strategic achievements for the department and the country.

“Probably the most significant highlight is that the department is well on its way to achieving the President’s investment target of R1.2 trillion over 5 years. It was announced at the 4th Investment Conference in March this year, that the dtic has achieved 95% of this target,” says Shabeer.

He has done very important work done institutionalise and provide a sound framework for the implementation of the African Continental Free Trade Agreement (AfCFTA). Shabeer was also instrumental in the dtic’s quick and agile response to assist distressed companies during the Covid 19 pandemic, the July 2021 unrest in KZN and Gauteng, the very recent flooding in KZN and many parts of the Eastern Cape. Furthermore, it is important to him to play a part in dealing with poverty, unemployment and inequality.

Shabeer successfully manages and provides leadership to a combined budget in excess of R25 billion for the DTIC and 17 entities. He has also managed to successfully implement several business improvements to systems, policies and procedures and has created a strategic risk management and compliance function responsible for ensuring compliance with the PFMA.

Shabeer is also a member of the executive board; the bid, risk and ethics committees and the special economic zone funding committee. Furthermore, he is currently acting director-general for the department, chairperson of the audit committee as well as chairperson of the investment committee of the newly established Tshwane Automotive Special Economic Zone – Africa’s First Automotive City located in the City of Tshwane.

Even so, Shabeer was astonished and rather overwhelmed when he received the Future Fit award. “I was really humbled at being recognised amongst the many giants of our profession. In fact, I have a photograph with Professor Wiseman Nkhulu, whom I have always respected and admired which I will treasure forever.”

Shabeer believes the award will have an impact on his career. “SAICA is a brand that is associated with trust and ethical values and this recognition means a lot to me as the recipient of the award, as well as to the industry and employers at large. Most employers these days understand the importance and value of their employees belonging to one of the world’s leading accounting institutes and in fact, many employers make it a requirement, so this is a valuable award which will really go a long way.”

Coming from the public service, it means a lot to Shabeer that the contributions of public servants are being recognised. “I would really like to express my grateful appreciation to SAICA. I hope that this award will encourage other chartered accountants to join the public service and start making a difference. I would also like to recognise the Minister, Deputy Ministers as well as my wonderful team at the Department of Trade, Industry and Competition, without their unwavering support and dedication, this award would not have been possible.”

He is all set to continue making a difference in the world and in South Africa in particular. “Cabinet has just announced my appointment as the Accountant General so my immediate goal is to focus on the task at hand and try and make a difference.”