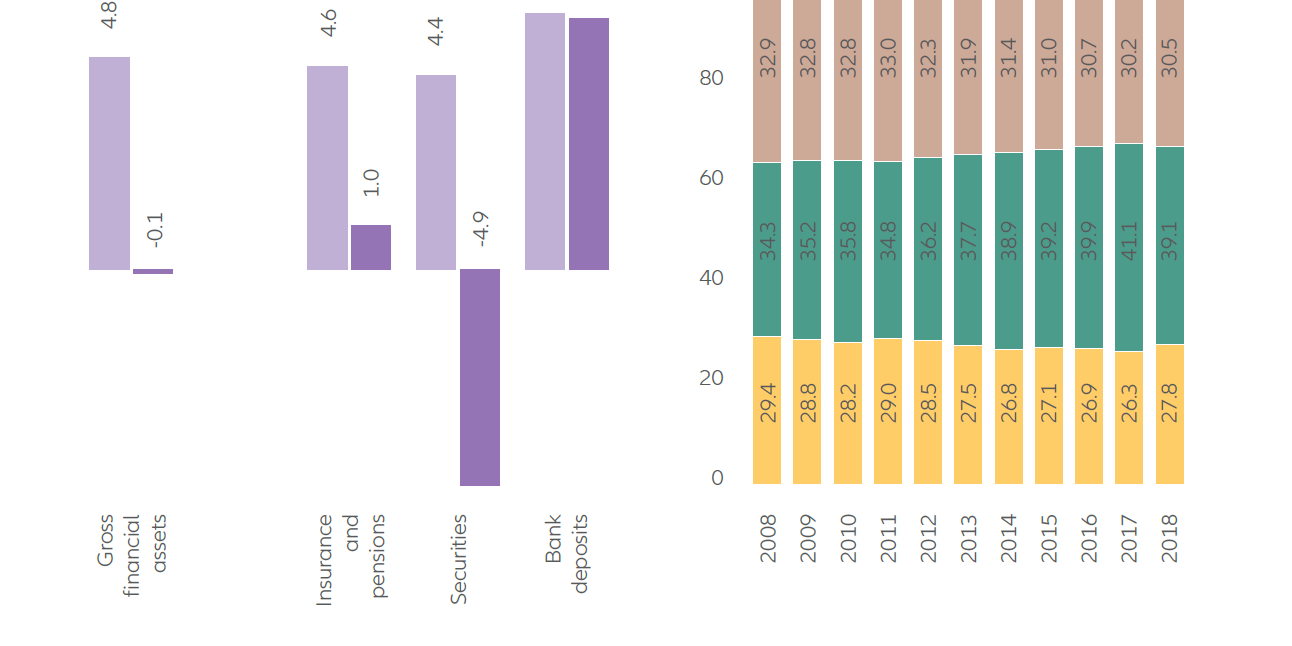 Allianz unveiled the tenth edition of the Allianz Global Wealth Report, which puts the asset and debt situation of households in more than 50 countries under the microscope. A sad premiere: in 2018, financial assets in industrial and emerging countries declined simultaneously for the first time; even in 2008, at the height of the financial crisis, this was not the case.

Worldwide, savers were in a bind: On the one hand, the escalating trade conflict between the US and China, the endless “Brexit saga” and increasing geopolitical tensions, on the other hand, the tightening of monetary conditions and the (announced) normalization of monetary policy. The stock markets reacted accordingly: Global equity prices fell by around 12% in 2018. This had a direct impact on asset growth. Global gross financial assets of private households[1] fell by 0.1% and remained more or less flat at EUR 172.5 trillion.

“The increasing uncertainty takes its toll,” said Michael Heise, chief economist of Allianz. “The dismantling of the rule-based global economic order is poisonous for wealth accumulation. The numbers for asset growth also make it evident: Trade is no zero-sum game. Either all are on the winning side – as in the past – or on the losing side – as happened last year. Aggressive protectionism knows no winners.”

The gross financial assets of South African households declined by 3.2% in 2018, marking the first decline since the financial crisis back in 2008. The decline was triggered by a sharp fall in insurance and pensions (-2.0%) and other assets (-9.5%). Bank deposits, on the other hand, were growing relatively healthily, clocking a rate of 7.8% (but account for only 15% of all financial assets). Growth in liabilities accelerated to 6.9%, the fastest increase in six years. As a result, the debt ratio of households etched up to 44.3% at the end of 2018, well above the average of emerging markets of 40.3% – but still ten percentage points below the pre-crisis peak.

Just a bump in the road?

For the first time in over a decade, the global wealth middle class did not grow: At the end of 2018, roughly 1,040 million people (among them almost 6 million South Africans) belonged to the global wealth middle class – which is more or less the same number of people as one year before. Against the backdrop of shrinking assets in China, this does not come as a big surprise. Because up to now the emergence of the new global middle class was mainly a Chinese affair: Almost half of their members speak Chinese as well as 25% of the wealth upper class. “There are still plenty of opportunities for global prosperity,” said Arne Holzhausen, co-author of the report. “If other heavily populated countries such as Brazil, Russia, Indonesia and in particular India would have a level and distribution of wealth comparable to China, the global wealth middle class would be boosted by around 350 million people and the global wealth upper class by around 200 million people. And the global distribution of wealth would be a little more equal: at the end of 2018, the richest 10% of the population worldwide owned roughly 82% of total net financial assets. Questioning globalization and free trade now deprives millions of people around the world of their opportunities for advancement.”

Convergence between poorer and richer countries comes to a halt

In 2018, gross financial assets in emerging markets not only declined for the first time, but the decline of -0.4% was also more pronounced than in the industrialized countries (-0.1%). The weak development in China, where assets fell by 3.4%, played a key role. However, other important emerging markets such as Mexico and South Africa also had to absorb significant losses in 2018.

This is a remarkable trend reversal. Over the last two decades, financial assets growth in poorer regions was on average 11.2 percentage points higher than in the richer ones, even if 2018 is included .It seems that the trade disputes have set an abrupt stop sign for the catching-up process of the poorer countries. Industrialized countries, however, did not benefit either. Japan (-1.2%), Western Europe (-0.2%) and North America (-0.3%) had to cope with negative asset growth, too.

Worldwide household liabilities rose by 5.7% in 2018, a tad below the previous year’s level of 6.0%, but also well above the long-term average annual growth rate of 3.6%. The global debt ratio (liabilities as a percentage of GDP), however, remained stable at 65.1%, thanks to still robust economic growth. Most regions saw a similar development in that respect. In Latin America the debt ratio did not change much in the last four years and remained at a modest 29%. This is in sharp contrast to Asia (excluding Japan) where it increased by more than 20 percentage points over the last decade.

“Debt dynamics in Asia and particularly in China are concerning,” commented Patricia Pelayo Romero, co-author of the report. “Chinese households are already relatively as indebted as, say, German or Italian ones. The last time, we had to witness such a rapid increase in private indebtedness was in the USA, Spain and Ireland shortly before the financial crisis. Compared to most industrialized countries, debt levels in China are still markedly lower. Supervisory agencies, however, should no longer stand by and watch. Debt-fueled growth is not sustainable – even China is not immune against a debt crisis.”