COVER STORY: A leader who demands excellence and delivers it too 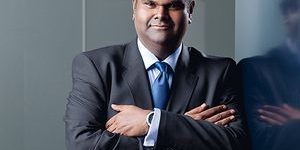 There has never been a substitute for hard work for Seelan Gobalsamy. From the CA(SA) qualification which he acquired in his early twenties to his role as CEO of STANLIB, he has been driven by the desire to make a difference – first in his own life and now in that of others. Monique Verduyn spoke to him

His team will tell you they have never worked with a leader quite so passionate and dedicated. Seelan Gobalsamy (39) is a hard worker. That he studied every past matric exam paper since 1948 to prepare for his matric finals in 1992 will leave no one in any doubt.

If anyone needed convincing that the CA(SA) qualification opens doors for people, he’s the man to tell them. Gobalsamy succeeded Thabo Dloti as CEO of STANLIB – one of the most respected asset management companies in South Africa in March 2014.

It’s the summit of a career path that began with an enormous amount of grit and determination. A person who has always thrived in learning environments, Gobalsamy completed his schooling at a public school, East London Secondary School, at 16, and studied for his BCom in Accounting and Law at Rhodes University. Despite achieving  A-symbols in matric, none of the hundreds of bursaries he applied for materialised.

But he would not allow circumstances to stand in the way of his future. Gobalsamy made a plan to study towards a BCom part-time, which he would fund by working at a local Edgars store.

He says his lucky break came when an East London company tracked him down and awarded him a bursary to study full-time at Rhodes after reading about his stellar matric performance in the Daily Dispatch newspaper. While he was determined to qualify either way, he says studying full-time allowed him to qualify as a CA(SA) much earlier, in 2000.

His decision to become a CA was influenced by a speaker at a careers evening. “He told us that if we were prepared to go down the arduous seven-year road to becoming a CA(SA), there would be many advantages.” One of them was a monthly salary of R12 000, which sounded like a lot of money to me. Most importantly, I believed it would secure my financial freedom and that of my family.

Entrepreneurship is in Gobalsamy’s DNA. “I come from a very humble family,” he says. “We had just about enough to get by, but there was no surplus left over to do any of things we really wanted to do. I sold samoosas in the evenings and sweets at school to lessen my family’s financial burden.”

He learned business acumen early on in his life. His great-grandmother wouldn’t give the teenager pocket-money or treats. Instead, she would give him “things to sell – anything and everything”, he says.

“She would give me boxes of vegetables, and it would be up to me to work out how much to sell them for to turn a profit. I have always been business-minded. You could say I started doing an MBA in high school,” reminisces Gobalsamy.

At university, between lectures and maintaining his status as an A-grade student, Gobalsamy remained an entrepreneur at heart. He smiles when recounting that in his dorm at res, he had little space for much else than his single bed and tiny desk among all the boxes piled to the ceiling filled with T-shirts for his thriving business and stock for his tuck-shop. In his fourth year he managed to buy his first car.

DEVELOPING A TALENT FOR FINANCIAL SERVICES

He began his career at an auditing firm, where in the process of doing his articles, he was exposed to a number of different industries, companies and cultures, and where he began to develop an interest in financial services and investment management. He later moved to a niche insurer, Prosperity, a 50-year-old business that had started in the former Transkei, where he became Chief Operating Officer and Chief Executive. Prosperity is the oldest black-owned insurance company to be licensed in South Africa by the FSB.

“What appealed to me about the business was that it had purpose and was ethical,” he recalls. “There was something noble in helping customers to build financial freedom and in educating them about the need to let their savings grow and mature. By contrast, my father had a policy many years back which matured, but did not even amount to enough to pay my school fees. It was at Prosperity that I realised my biggest dream was to help others make the most of their savings.”

His next move was to Old Mutual where he spent almost ten years, fulfilling a number of senior roles, including financial director, head of administration, head of corporate distribution, and Managing Director in the Old Mutual Corporate business. “These different roles helped me to build experience in institutional markets, client relationship management, and sales and servicing,” he says.

He joined the Liberty Group in 2010 when he was appointed to head up the Liberty Corporate business. In three years, he and his team expanded into new markets and created a more efficient retirement fund administration business. Now, as head of STANLIB, he says his role is not about changing the business, but about augmenting the delivery of the strategy.

“It’s an incredible business,” he adds. “We manage and administer more than R560 billion worth of customer assets. The company has a clear vision and strategy, and my goal is to deliver on a strategy which has been in place for several years.”

Another goal, he says, is to continue to grow the company as the African asset manager of choice, a market which STANLIB is well placed to capture as it continues to expand into the continent, buying businesses and creating new ones from scratch.

“With a multi-franchise model, we now operate in ten African countries including South Africa, and we have to be relevant to all the communities we serve. That’s one of the major reasons for building a physical presence on the ground; it enables us to better engage on a country-by-country basis.”

In June 2014, the asset manager acquired a business in Ghana. For the previous CEO, Dloti, launching an operation there was critical. Gobalsamy has the same appetite for the region. “I fully supported and agreed with the views on this. Nigeria has toppled South Africa as the continent’s largest economy with a GDP estimated at $510 billion. The addition of STANLIB Ghana is an exciting development. This is our first step to creating a presence in West Africa.”

STANLIB is also investigating acquisition opportunities in Nigeria after years of groundwork to gain entry into Africa’s biggest economy. As Gobalsamy says, STANLIB has ceased to be a South African company with a presence in Africa, and has become an African company domiciled in South Africa.

BEING GLOBALLY COMPETITIVE IS the only OPTION

The company has expanded its investment capability into alternatives such as direct property, infrastructure, private equity and passives. This is part of an ongoing drive to build new capabilities and take advantage of skills for new investment opportunities across the continent. “We continually increase our efforts to deliver investment and service excellence through innovative ideas,” says Gobalsamy. By November 2014, the recently launched Infrastructure Fund was fully subscribed at R1,2 billion.

He stresses that the investment manager has to be globally competitive. “We do not compete with other asset managers in South Africa; we compete with asset managers globally, particularly as more international competitors are coming into the country. In addition, we also have to compete with retailers and telecommunications companies selling financial services products. As a result, the STANLIB teams have to benchmark themselves against the best in the world.

“My aim is to continue growing, make sure we have the right talent, focus our people on investment excellence and performance, and ensure our customers get the investment return they want. Satisfied customers and investment excellence can only be achieved when you have the right people in place, who are inspired to deliver their best and to do what they do with passion. It’s a challenge in a business that has more than 400 000 retail and institutional customers, but it has to be done.”

Gobalsamy says business today must have a clearly defined purpose that has meaning for its employees, customers and shareholders. A financial services company is there to help create financial freedom for clients, and to be there when people have a need. He sees the company’s role as to encourage ordinary people to save and invest, and help enable their financial freedom: “For this, not only do we need passionate and focused investment professionals; we also need the right infrastructure in place to support the business, both locally and across Africa.”

Gobalsamy believes that people do not only do business and stay in jobs because of the money. People want to be valued, motivated and empowered and to make a difference. Making money isn’t what drives him – making a difference is.

He’s not the type of person to seek out mentors, but he says he has had opportunities to build many meaningful connections with people who have motivated and empowered him throughout his career.

Here are some of his leadership tips he shares with his team:

He also points to the poor savings track record of South Africans and Africans in general, and sees his leadership role encompassing more than just STANLIB. “It is exciting to lead a company that is passionate about education and enabling financial freedom. My role is to inspire the people of STANLIB to encourage Africans to save more and invest to secure their financial futures. ”

Overseeing almost 700 employees, Gobalsamy has his work cut out for him as a leader. But despite his demanding schedule, he is accessible and has regular coffee sessions with staff to engage with them on absolutely anything they want to discuss with him. He also has quarterly business updates with them, and encourages all staff to email him with whatever issues they have on a dedicated “ask Seelan” email address.

Between the company and his family, there is little time left for leisure. His first meeting starts at 07h00, and he has dinner with customers and other stakeholders almost every night of the week. When he reads, his focus is on business books and he enjoys biographies about authentic leaders.

His ultimate goal is to use his position of influence to improve the lives of STANLIB’s over 400 000 customers and hundreds of staff members, and to have a positive, lasting impact on our community. This, he believes, is what success looks like. He is a firm believer in the power of education to transform lives, and talks passionately about the company’s efforts to educate and empower the youth through its learnership and financial literacy programmes.

Gobalsamy is a proud South African who has witnessed first-hand the progress we as a nation have made in our young democracy. He remains deeply committed to making a difference and contributing to Africa’s future.