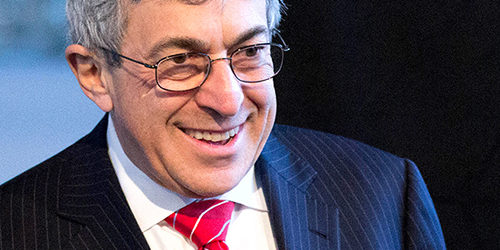 From humble beginnings to becoming the award-winning CEO of Henry Schein, Stanley Bergman, is an inspiration and the perfect example of success through dedication, creativity and hard work

Stanley Bergman came to the United States in 1976, joined Henry Schein in 1980, and progressed to become CEO in 1989, when turnover was $200 million. Since then, Henry Schein’s turnover has increased to an astonishing $10,1 billion in 2020, making the company the world’s largest provider of health care products and solutions to office-based dental and medical practitioners.
Stanley has won numerous awards throughout his career, including CEO of the Year in 2017 − a coveted honour also received by the likes of Jack Welch and Michael Dell.

Under Stanley’s leadership, the company is particularly dedicated to the ESG (Environmental, Social and Governance) movement, years before many other prominent American corporations.
Henry Schein has also been ever-present on Fortune’s list of the World’s Most Admired Companies for 20 consecutive years and is considered by many in its sector as a leader in social responsibility.
Having made countless significant contributions and receiving multiple awards for his work, Stanley feels his career is far from over and that his most important contribution so far has been assembling a world-class team, known as Team Schein, with some 21 000 team members in 32 countries.

‘When I say “world-class team”, it’s a team that works very well together, driving a mission. For me, the team is the greatest recognition and achievement. You can have a phenomenal strategy, but if you don’t have a team that can rally behind the consensus, you will never get that strategy implemented. And at the same time, if you have a poor strategy but you have a highly motivated team, you’ll fix that strategy. The team will fix it.’

For him, the ESG movement is about balancing all the constituents in society. ‘It’s got a fancy name now, but it goes back a long time. Organisations like the World Economic Forum have been talking about ethical capitalism, about doing well by doing good, for decades.

Benjamin Franklin called it ‘enlightened self-interest’ – the notion that businesses should be about more than making money. They should be there for all the constituencies in society.’
This has, he says, been part of the Henry Schein values for almost 90 years. ‘We codified it over 30 years ago and called it the five constituencies that make up Henry Schein’s Mosaic of Success.’

Stanley explains Team Schein is about a value system where people are number one and everyone must be given an equal opportunity, regardless of their background. ‘We have many people in senior leadership at Henry Schein that do not have a university degree but are phenomenal leaders and subscribe to our values. It’s an environment with an open-door policy where anybody can say anything to anyone so long as it’s not at somebody’s expense. We have this fundamental DNA which includes, from a values point of view, our suppliers, customers, the team and our investors. The fifth constituent, I believe, is the “secret sauce” − it’s what we do to make the world a better place − whether it’s the professions we serve, the communities we are in, or broader society. All of that makes up the Henry Schein Mosaic of Success. We attract leaders and team members that are interested in this unique ecosystem, which in the end if you boil it down, is what ESG is all about.’

Getting 21 000 individuals in 32 different countries to buy into a common cause and goal is no easy feat. ‘The world today is not a world where a boss can sit at the top issuing orders,’ Stanley explains. ‘People care about working in an environment where the person that leads is a coach, a facilitator, and a mentor. Through that environment, and spreading that DNA through the organisation, the team follows much easier than if you bark out orders. I’m committed to finding people to work with that are smarter and better than me in particular skills. So, I find myself as an orchestra conductor, with a great orchestra.’

Keeping your finger on the pulse with such a big team is two-dimensional, explains Stanley. ‘First, there’s the pure math – what’s happening? The numbers are very important – they tell the truth.’

From a macro point of view, Henry Schein has what they call a Pulse survey, a bi-annual survey to get direct feedback from the team. ‘From a leadership point of view, it is a real good way to get a feel for what is going on.’

Pre-COVID, Stanley and the leadership team used to travel a lot. ‘When I go into a Henry Schein facility, I ask to meet with 10 to 15 random team members, and we have an open discussion where people will tell me what is going on. We have round tables and we’re keeping our finger on the pulse that way. It is also important to get that subjective view from talking to people.’

Having studied at Wits University, Stanley believes his fundamental training in accounting in South Africa and the preparation for the CA exam helped him to understand the basics of business. His training has served him well when discussing business with bankers and accountants in the United States and elsewhere. ‘I often find myself in a situation where I’m in a room, talking to bankers from some of the biggest firms, if not the biggest, and they don’t quite understand the basics. They understand spreadsheets, the strategies, can put together remarkable charts. But then I pull out my T-account with debits and credits, expenses, gross profit – all the stuff I learned 50 years ago, and I give them a run for their money! So, the basic education I received stood me very well,’ he explains.

‘So, I believe the education, training, and qualifying for CA(SA) was remarkable and I assume it’s still the case today.’

Stanley says if he had to choose all over again, he would still choose to become a CA(SA). ‘My father said to me, “You can do whatever you want to do, but you’ve got to get a formal education, either as an accountant, a lawyer or as an engineer.”’
He admits laughingly that he wasn’t very good at physics, chemistry, or languages at school. He wasn’t the best at math but was always good with business thinking and therefore decided to become a chartered accountant. ‘I’m thankful that my father pushed me into that and wouldn’t trade my education for anything. And, by the way, if a résumé crosses my desk of a CA(SA) looking for a position, whether it is in the business or on the accounting side, I take that résumé very seriously,’ he smiles.

Although he says he doesn’t have a secret to success, Stanley is happy with what he has achieved in his life. ‘I view life as balance. I have three highways, if you will, that drive me. The first is family – that has to be the priority. The second is my profession. And the third is the ”something else” –for me, it is my social responsibility work, culture, music, and skiing. And you’ve got to do each one with passion but balance each one.’

At different stages in your life, you have to balance these things a little differently. ‘When the kids are young, you’ve got to be with them a little bit more. When they grow up, do a bit more with social responsibility and the work side.’

Many people have played a part in Stanley’s career and life successes. His parents had a remarkable impact on the way he approaches life. ‘They had a small store in a place called South End in Gqeberha, a multiracial community. From the age of three, I used to hang out in the store. My mother was a salesperson, but she was exceptionally outgoing, and she would bring people together from all walks of life, and people would be happy to be around her. I learnt a lot from that.’

His father was someone who didn’t speak much but was an enormous community leader. ‘When he spoke, people listened. So, he taught me when you open your mouth, make sure you’ve got something to say.’

Growing up, Stanley was very active in a youth group and used to organise summer camps. ‘I learnt that, if you want to get things done, you’ve got to get everybody involved, make everybody happy. It’s all about getting everyone involved.’

He has also been fortunate to have had remarkable mentors. ‘The late Jay Schein taught me it’s all about the people and results.’

Jay gave a lot of young people incredible opportunities and would guide them. ‘He would even let them fail. I failed so many times. I cost the Schein family a lot of money in all my failures, but as a net result, long-term, the family and the business did well.’
The late Edward B Shils, the founder of the Wharton Entrepreneurial Center at the University of Pennsylvania and more, was also one of Stanley’s mentors. ‘Dr Shils always said to me, “Stan, an important leader is not one who can make decisions on clear things. A leader has to make decisions and guide through environments of ambiguity.” And I always have that in my mind. I say, if it’s clear, don’t come to me with a problem. If it’s ambiguous, let’s have an indaba and think it through.’

These days it is important to Stanley to figure out how to continue to enable people to make a difference. ‘Our job as leaders is to give people the platform to do what they want to do − whether it’s in business or social outreach. I think it’s critical. I hope that I will be in a position to create the right platforms to enable transition in all the activities I’m involved in, whether business, not-for-profit, or my kids, being in a position to move on in their careers, hopefully I gave them the platform that will enable them to do whatever they want to do. So, it’s about platform building.’

Robert Kennedy said, ‘Some men [and women] see things as they are, and say why. I dream of things that never were, and say why not’. For Stanley, his life has been ‘why not’.