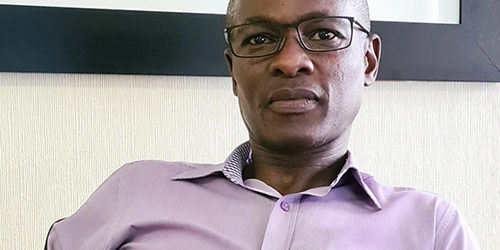 This is custom heading element with Google Fonts

SAICA’s Code of Ethics for Professional Accountants states that a distinguishing mark of the accountancy profession is its acceptance of the responsibility to act in the public interest. Thami Zikode is one of the members of SAICA who have displayed this distinguishing mark by having the necessary skills to identify ethical dilemmas, make ethical judgements, and have the moral courage to do the right thing

With more than 13 years’ experience in both the private and public sectors, Thami Zikode CA(SA) has played a role as internal and external auditor, regional finance manager, director of financial analysis, business risk specialist and business executive throughout his career.

Currently serving as the chief audit executive and acting group executive governance and risk at the SABC, Thami was instrumental in engaging with the Standing Committee on Public Accounts (SCOPA) and the parliamentary portfolio committees regarding issues from financial management, financial reporting and governance and assurance perspectives. He is passionate about driving ethical behaviour and culture in both the public and private sectors.

Thami was appointed to serve as chief audit executive at the SABC in November 2017. ‘I was responsible for general assurance audit, information technology audit, as well as forensic investigations. At the time, a lot of issues were coming out from the parliamentary inquiry to the Special Investigations Unit (SIU) report and the Public Protector report, as well as negative reporting from the Office of the Auditor-General,’ says Thami.

When Thami joined the SABC, he found that several internal forensic investigation reports were unfinished. Even if investigations had been carried out and reports produced, SABC management did not follow through with recommendations and no disciplinary proceedings were instituted against those found to be on the wrong side of the law.

Thami soon realised that the investigations involved some of the group executives in the SABC and needed to be completed. ‘One of the challenges that you face in any environment is having to sit across these colleagues in group executive meetings while investigating them at the same time.’

During his investigations, Thami had to table repors to the social and ethics committee as well as the audit and risk committee. ‘One of the group’s Exco members made a very interesting comment to me after one of the meetings. He said, “This is the SABC and the way you are carrying on, we will pull the carpet out from under your feet.”’

One specific report stood out to Thami. ‘Having issued the report on a Monday, the particular group executive chose to resign with immediate effect.’

When Thami got home that Friday, he was attacked. ‘A vehicle was following me very closely on the way home. The guy in the passenger side got out with a firearm in his hand and charged towards my car. That is when I realised something was wrong.’
Fortunately for Thami, he was carrying his own firearm that day. He discharged a shot and managed to hit his assailant and the other vehicle’s tyres. ‘I never had to guess where this attack emanated from, especially after listening to what was being said in meetings,’ he says.

On Monday Thami was back at work at the SABC and has been there since. He is planning to finish his five-year term in October next year.

‘I think a couple of my colleagues thought I was crazy when I accepted the job at the SABC,’ he laughs. ‘Before I applied, a previous board member of the SABC spoke to me about the SABC’s challenges and said they required someone of my calibre, somebody to stand up for what is right.’

After contemplating the idea for a while, Thami realised it was the perfect opportunity for him as a CA(SA) to make a mark in the sector and to be a part of the team to turn around the SABC. ‘Also, I realised I could be the one person that will stand for the truth, even if it means that I stand alone.’

Thumi considers reporting to fellow executives his most challenging test with regard to ethics. ‘If you do it wrong, the whole executive team will turn against you. So, the only way of doing it is to be respectful when putting the facts on the table and allowing everybody to have their say about the findings of the forensic reports. It’s not easy, because these are the decision-makers of the organisation.’

At some point Thumi had to take his findings directly to the audit and risk committee without involving the executive team. ‘I explained my dilemma to the audit committee − that I had to table a report in the group exco with findings against some of the members and that those were the people who needed to recommend my reports to the audit and risk committee. If they decided to block it, it would not go through.’ But even when they tried to block some of the reports Thumi ensured that all governance processes were followed and that everything reached the risk committee as well as the social and ethics committee.

Looking back, Thumi knows he made these decisions irrespective of whether they could have backfired, because they were the right ones and for the right reasons. ‘I wasn’t worried that I would be disciplined for it, because I was doing the right thing. What came out of this was, how do I look at my colleagues after having reported them to the risk committee? I still managed to have a good relationship with them. Some of them, after having tendered their resignations, commended my courage.’

Thumi believes his courage to do the right thing emanates from SAICA’s code of conduct. ‘For me, that document is not just a piece of paper with tick boxes. Also, the issue of ethical decision-making should not just be a tick box exercise. It’s something that you need to be mindful of at all times.’

He thinks many people fail to understand that if your ‘favours’ to friends or executives came out, your reputation would be irrevocably gone. And more importantly, not just the individual’s reputation is at stake but that of the profession as a whole. ‘For me, courage is making decisions that I would be happy to read about in the newspaper tomorrow morning …’

When it comes to the threats Thumi had to face because of his courageous decision-making, the important thing for him at the time was the appointment of core ethical leaders and that those people stood by him and supported him. ‘After a lot of the old executives went out, the new executives said, “We are here for the SABC. We are not here for our benefit. Whatever we are doing, we are doing for the benefit of the South African citizens and our democracy,”’ he explains.

According to Thumi, the new leaders were also facing threats and challenges. They were all in the same boat in terms of paving the way for dealing with issues, to the point where they got all the executives, including the board, to see what the organisation needed.

At the SABC, the whole environment, including the audit fundamentals, had to change, and Thumi is pleased with what they have achieved so far.

His message to other CAs(SA) is to keep doing the right thing. ‘If you decide to sell your soul to the devil, you are definitely not getting it back.’

His advice is that when an ethical dilemma puts you in a space where your life is being threatened, you need to change your communication mode. ‘Make it know to whoever you are communicating with that the whole organisation is aware of the ethical matter that you are dealing with. That will make them think twice …’

For Thumi, the time of talking about ethics for the sake of ticking a box is in the past. It is important that CAs(SA) start doing the right thing at all times, no matter what.