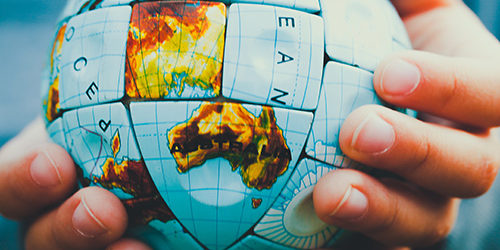 The world is entering a period of significant and exponential change, whether in the use, application and power of technology, climate change, or in the expected shift in the political and social sphere. We touch on some of these changing concepts and ideas

Current changes have a fundamental impact on all aspects of modern life, both personal and professional. Most of these changes has been brought about by the Fourth Industrial Revolution and amplified by the COVID-19 pandemic.
Industrial revolutions

We are in the middle of the next industrial revolution in which new technologies or novel ways of perceiving the world trigger changes in economic and social structures. Industrial revolutions are not only about the technology driving the change − social and economic changes and their impact are just as important, as they have a significant impact on the way society does things and perceives the world.

The Fourth Industrial Revolution (4IR) is where the blurring of lines between digital, physical and biological systems occur. If we only focus on technology, 4IR is driven by two broad types of technologies: technologies that mimic or enhance the human-like experience and data-driven technologies that allow value to be extracted from data. This evolution is different from previous industrial revolutions in that there is exponential acceleration in computational ability, with technology developing cognitive abilities at different levels of learning and thinking. The digital and physical are being connected and in some cases, humans and computers are connected through shared data.

4IR is not only going to impact technology, products and services, it is also having an impact on our value and belief systems and will require that some existing ideas, theories and beliefs be revised.

Changing values and beliefs
History has shown that capitalism has left a large divide between the ‘haves’ and ‘have nots’. On the other hand, socialism has not delivered on its promises either. Democracy also has its challenges, with futurists expecting a new hybrid model to emerge driven by the democratisation of ‘everything’ through applications of modern technologies.

In recent years, there has been a shift away from maximising short-term profit at all costs to creating shareholder value, with the focus of forward-looking firms now falling on considering the stakeholders and those in the ecosystem in which organisations find themselves. It is argued that the value lies in the connectivity within ecosystems. The moment when the ecosystem is considered, it requires organisations to consider the long-term sustainable prospects of all those in the ecosystem and requires an organisational shift from having a finite mindset, where they obsess about beating their competition, to an infinite mindset, where they are obsessed about their vision and where they are going.

The organisational focus is on vision, culture and values that will help build organisations that outlast generations and their current leaders. They adapt to infinite possibilities and allow leaders to balance the main quadrants of the rational, emotional, spiritual and physical to deliver sustainable leadership with integrity. Competitors come and go, the rules are changeable, and there is no defined endpoint. To be an organisation with an infinite mindset, the organisation’s values, vision and mission must be articulated to ensure that employees feel part of an idea bigger than themselves − a forward-looking statement that is inspiring and compelling so that people are willing to sacrifice to see that vision advanced.

Although there is a place for a finite mindset, to make decisions using an infinite mindset, new performance measures or metrics are required. At the same time, reporting mechanisms should be expanded. In the capitalist era, it was sufficient to only consider the bottom line (balance sheet and income statement), but a change in the social fibre of society saw the evolution from annual reports to the rise in popularity of integrated reporting with the increasing focus on sustainability. This shift away from historical financial information to forward-looking future-focused business decisions, relevant information and predictions has practical implications and results in less focus being placed on financial statements and more on integrated reporting.
Futurists argue that understanding the ecosystem, environmental, social and governance (ESG) reporting is paramount to enable organisations to be more transparent about sustainability, ESG and the related risks and opportunities it faces. The purpose is to show that its actions are sincere. ESG reporting encompasses both qualitative disclosures of topics and quantitative metrics used to measure a company’s performance.

Established business models and theories are also being questioned. There is a growing call for moving away from traditional profit-taking at all costs, from a consumption/linear economy (where products and services are being made, used and disposed of) to a circular economy (where the principles of make, use and return are gaining prominence within business). These and other models are based on the premise that the world has limited resources and value can only be created if shared equitably among all, both internal and external, in a sustainable manner. One permutation of this is the shift away from organisations being ethical (based on a set of predefined principles as determined by an organisation itself or other bodies) to value-driven actions taken where values are determined by a set of principles underlying society and the time in which an organisation finds itself. An emerging system is built around ‘ikigai’, a Japanese concept meaning a reason for being, with people finding the balance between ‘what we love’, ‘what the world needs’, ‘what you can be paid for’ and ‘what you are good at’.

Social impact, transformation and social justice
There has also been a change in how the interaction with stakeholders and society can be viewed. Organisations, and universities in particular, have moved away from ‘community service’ to wanting to make a societal impact through everything they do. In a university context, this extends to the research conducted and the attributes developed in students that are delivered to the marketplace. These attributes include an enquiring mindset and being an engaged citizen and dynamic professional while also being a well-rounded individual. Professional bodies also consider competency and skill development more important than technical content.

The global increase in inequality in the last 30-odd years gave prominence to the notion of social justice, which is seen as a moral imperative demanding that people at all levels of society receive fair treatment and impartially share in the benefits of economic growth. Organisations strive to ensure equitable access and enjoyment of rights and freedoms reflected in the fair and just distribution of resources, opportunities, benefits, privileges and burdens in society or in groups, regardless of human diversity and historical injustices.

While there are various definitions for these concepts, the ideas of social impact, transformation and social justice are being embedded in the fibre of everything that organisations do and have become a business imperative.

Conclusion
To quote actress Felicity Jones from the biopic of the life of the late associate justice of the Supreme Court of the United States, Ruth Bader Ginsburg: ‘A court ought not be affected by the weather of the day but will be by the climate of the era.’ The premise on which this quote is based, as well as the underlying principles, applies to the current changing world. The values, norms and beliefs of the past won’t last forever. Values, norms and beliefs are − and forever will be − a work in progress. But we should also realise that the times have already changed. Organisations and those charged with governance should understand the changes that are occurring, as well as the values and beliefs of the era as opposed to those of the day, and react. Even though the changes mentioned above have occurred in a subtle way, they have powerful implications.