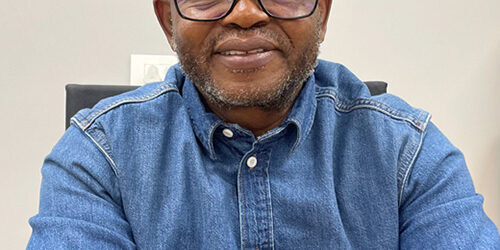 The former spokesperson and CEO of the Government Communication and Information System (GCIS), Themba Maseko, is part of the list of whistleblowers who came forward to expose the misdeeds of state capture.

Themba is one of the few who accepted his responsibility, had the moral courage to stand up for what is right and decided to act in the best interest of the South African public, even though it cost him a great deal.

He played a critical part in exposing the truth with regard to what the world has come to know as ‘state capture’ and appeared in the Zondo Commission of inquiry. Themba also penned a book called For my country: why I blew the whistle on Zuma and the Guptas.

At the moment Themba is working as an independent consultant. ‘Largely because if you become a whistleblower, it becomes impossible to get a job, so I’ve been self-employed for the past 10 years or so,’ he explains.

While working as the spokesperson and CEO of GCIS, Themba received a phone call from Ajay Gupta. ‘He insisted on having a meeting with me. I resisted a little bit because I was hearing stories about him being involved in some shenanigans, trying to force government to award contracts to his companies illegally.’

Eventually Themba agreed. On the way to the meeting, he received another call. This time from the then president, Jacob Zuma. ‘He said the Gupta brothers want my help. The call lasted less than two minutes but I was worried about it, because after working with him for more than 18 months he declined having meetings with me and never called me or answered my calls. So, the call he made to me was strange.’

According to Themba, Ajay demanded that he transfer the whole government advertising budget to his soon-to-be established New Age newspaper. ‘When I told him that is not how government works, he simply insisted that I transfer the money to his department. In short, I defied him.’

Themba went back to work but eventually got fired. ‘Zuma instructed Minister Chabane that I should be removed from GCIS.’ Without due process being followed, he was transferred to the Department of Public Service and Administration. ‘After about six months I decided to leave, because it was very clear that I was unwelcome because of the way I was transferred.’

Initially, Themba’s response was to defy both Zuma and the Guptas. ‘What they were asking me to do was irregular and unlawful. At first, I decided to sit quietly in my home and not let the world know what was going on. But after observing what was unfolding, I realised there was something unlawful taking place in the country where the Guptas were essentially behaving as if they were running the state. That is when I decided to become a whistleblower and speak up,’ he remembers.

Themba did an interview with the Sunday Times after which he was invited by the Public Protector, who was doing an investigation into state capture, to tell his story. ‘The ANC also said they wanted to investigate state capture allegations. I was the one and only person who was willing to appear before the ANC’s secretary-general, Gwede Mantashe, and testify to what happened.’

Themba explains that while defying the then-president, he never thought about fear. ‘When I finished the meeting with Ajay Gupta, part of me wanted to report the matter to the ruling party, the ANC. But I realised it would have amounted to me reporting the president of the country to his own organisation, so I decided against it and only reported it to Minister Chabane.’

According to Themba, Chabane made a commitment to raise the matter with the President and the ANC as well as offering his full support to him. ‘So, at that stage I didn’t fear anything because I knew I did the correct thing. I thought I was being a good example to other public servants – that if something is going wrong in your department, if there are indications of corruption, you should not only refuse to be a part of it but speak out and expose it.’

Having grown up in a very religious family, Themba learned the importance of being principled and ethical, making sure you don’t participate in corruption. ‘I believe if we steal money from the public purse, we are betraying the sacrifices of millions of South Africans who are hoping that the new state was going to lead to the improvement of their own lives.’

What drove him was not so much fear but a desire to do the right thing by exposing the corruption.

‘I will admit, I never thought of the true implications of becoming a whistleblower,’ says Themba. ‘Whistleblowing and exposing corruption were something very new and different within government. Part of the problem was that within the ruling party there’s a culture of people defending and protecting one another. Anybody who speaks out and exposes one of their own is alienated and seen as the enemy of the movement or enemy of the state. I experienced alienation of sorts because although a lot of people were willing to support me in private, but in public, very few were willing to be associated with me in any shape or form.’

For him, that is part of the challenge of a whistleblower. ‘On the one hand, you need to speak out and expose wrongdoing. But in doing so, you end up speaking about what it has meant for you from a financial perspective. The risk with that is that it ends up discouraging others from speaking up.’

Even today, the perceived risk of being associated with Themba still exists. ‘There is a term for us. PEP stands for “politically exposed p”rson.”. I wasn’t able to get any job because I was politically exposed. When I applied for funding to start a business, I couldn’t raise any funding from the financial institutions because I was deemed politically exposed. I couldn’t even invest money in other companies. Whistleblowers end up being treated worse than the thieves. Thieves can get business. They steal money, start businesses and make a living.’

Since the Zondo Commission and with the election of President Cyril Ramaphosa, attitudes are beginning to change. ‘People in the ruling elite are beginning to realise that corruption is a scourge facing our nation and therefore they need to stand up against it.’

Although more people are starting to answer Themba’s calls these days, he feels there is still a long way to go. ‘This is not just a problem unique to the public sector. Even in the private sector, exposing unethical behaviour, whether corruption or sexual harassment in the workplace, causes people to be alienated or lose their jobs. There needs to be change. As a society we need to take a stand. We need to oppose corruption wherever we find it – in government, in private companies and even in churches. Those who expose corruption need to be supported and not seen as pariahs.’

He feels professional organisations need to have an ethical code. ‘A code that doesn’t just become a document that people sign. There needs to be a form of training that is given to all professionals.’

From a government point of view, Themba feels there needs to be a strengthening of the law. ‘Firstly, to protect whistleblowers so that somebody who blows the whistle is protected and also supported financially and legally. That’s where the private sector and civil society organisations can play a role.’

Themba feels there is also a vital need for some kind of psychosocial support for whistleblowers. ‘It is a very stressful, emotionally draining experience. You feel alone and alienated. You can’t pay your bills. Although my family stuck by me, many other whistleblowers lose their families.’

Lastly, and possibly most importantly, is a need for society to acknowledge that corruption is a challenge, and the country needs to rise and speak out against it. ‘As a society we need to encourage ethical behaviour from the level of home, schools and churches … It needs to become part of our culture.’

His message for SAICA members is to have the courage to speak out in the face of corruption. ‘Accountants must make their contribution to our nation. They must ensure they conduct themselves in the most ethical way possible. Don’t be part of the corruption. Make our society and our country a better place.’

When asked whether he would do it again, Themba doesn’t hesitate to answer. ‘Without a shadow of a doubt, yes. Without thinking twice. Maybe I would do it differently, by preparing my family more with regards to the risks, but I would certainly do it again.’