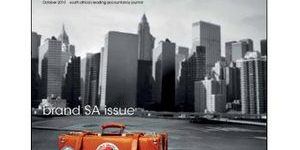 As I write this month’s editorial, brand South Africa is truly in the spotlight. The Information Bill and the media tribunal debate; former police chief, Jackie Selebi, granted leave to appeal his sentence; July trade surplus of R2 billion; and a new statistics revelation that black South Africans own 18 percent of the available shares of the top 100 companies listed on the JSE. Vehicle sales are increasing; there’s to be a new CO² car tax; tourism figures for the first half of the year surge; President Zuma’s family’s undeserved financial interest and gains since his presidency began; a three week public service strike; and mining licence issues. Nevertheless, some would argue that it’s business as usual…

But brand South Africa has never been stronger, which is evidenced by our President’s successful BRIC talks in August with the political leaders and leading businessmen of the relevent emerging economies. And brand South Africa is certainly evidenced by a generally positive view of South Africa as a potentially significant investment destination. In this issue, we raise material success factors, such as our resilient economy, the green shoots from hosting the world cup, Africa’s first underground railway, and all brand SA’s endeavours. And, incidentally, but no less importantly, we discuss corporate governance.

Some may rightly feel that it’s business as usual for South Africa, given all that puts us in the global headlines, and I’m enormously positive about our people and our economy – as I am sure are all our members.

Afterall, it was robust challenges that got us past apartheid.