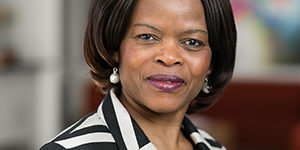 PwC is proud to announce the appointment of Shirley Machaba as its new CEO for Southern Africa, effective from 1 July 2019. Machaba is the first black African woman to be appointed in this role within PwC in Southern Africa, marking a significant milestone for the firm.

Machaba takes over the reins from Dion Shango, who has held this position since 1 July 2015. Shango was recently elected as PwC Africa’s new CEO, also with effect from 1 July 2019 after a voting process by the PwC Africa partners.

Commenting on Machaba’s appointment, Shango says: “PwC believes Shirley has the leadership skills, experience and influence to lead PwC Southern Africa in the coming years. We believe that Shirley is an excellent choice to lead our local firm, especially as the business continues to explore new areas of growth and development across Africa.”

Machaba has a particular interest in how business is led and organises itself within the context of what feels like continual change. “Being appointed to the PwC Southern Africa CEO role is a privilege. I’m proud of our partners’ confidence in me and look forward to leading the practice with a team of dedicated and capable partners and staff,” adds Machaba.

Shirley has been a partner in PwC’s assurance services division for over 15 years. She is a Chartered Accountant (CA) and Chartered Director Southern Africa (CD (SA)), and has over 26 years of internal and external audit, risk management, compliance and governance experience within the private and public sectors across all industries.

Machaba also served as a member of the PwC Africa Governance Board and as Chairperson of the PwC South Africa Governing Board from October 2012 to June 2018. She is currently PwC Africa’s Governance, Risk and Internal Audit Leader, and Diversity & Inclusion Leader for PwC Southern Africa.